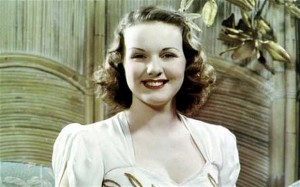 Deanna Durbin has passed away at the age of 91. I can’t pretend to be a connoisseur of her movies, nor can I speak with any authority on how she compares with her contemporaries. The tributes are pretty fulsome concerning her movie career. Her dislike of celebrity Hollywood is well known. The Daily Telegraph obituary describes her debut as “..an enchanting 14 year old with a remarkable voice.” She retired on her own terms, before the age of 30, disinterested in a new project for which many felt she’d be perfect – My Fair Lady.

I had always admired her voice in grainy black and white movies. (Yes, have to admit it – love those ol’ b&w movies. One of my more nerdish accomplishments is to have gone backstage at the Hollywood Bowl, shaken hands and chatted for 30 seconds with Robert Osborne of TCM.) Via a rather circuitous route, I rediscovered the sound of Durbin’s voice almost by accident.

A few months ago, browsing through an anthology edited by A.N.Wilson, The Faber Book of London, I came across some paragraphs from Anthony Powell’s Casanova’s Chinese Restaurant,  part of  his sequence of novels called A Dance To The Music Of Time. Powell was writing about a bomb site in the middle of what he called “Cheerless Soho.”

“…the basement [of the “bombed-out public house on the corner”] was revealed as a sunken garden, or site of archaeological excavation long abandoned.”  Powell indulges in a “luxurious fantasy” and imagines the scene, replete with a song “…strong and marvellously sweet, of the blonde woman on crutches, that itinerant prima donna of the highways whose voice I had not heard since the day, years before when…he had talked of getting married.”

The vivid writing takes you to Soho, which I first remember around 1960, the date of Powell’s book. My father drove me up to London every few weeks for a haircut at the corner of Brewer and Wardour Streets. This was the Soho of the seedy Paul Raymond and his mistress, the glamorous Fiona Richmond, although our Salvation Army commitments meant such goings on were unknown to me. (I lived through the Profumo Affair in 1963 but must have been shielded from it, only discovering the scandal, with relish, during tedious school history lessons some time later.)

Raymond’s notorious business interests and his relationship with Richmond are the subject of a new and not very well reviewed film The Look of Love, starring Steve Coogan and Anna Friel. Raymond’s lifetime was spent  building first, a soft-porn and then a property empire before he died, aged 82 in 2008. Fiona Richmond is still very much alive but seems to be as reclusive as Durbin was in later life, as can be seen from this interview about her memories of those times in the Daily Telegraph.

Powell was also writing of memories, but from an earlier time, before the Blitz that destroyed the pub on the corner. Musing on his ‘itinerant prima donna’ he quoted two lines:

Pale hands I loved beside the Shalimar,

Where are you now? Who lies beneath your spell?

Intrigued, I went off in search of the quotation and was unexpectedly moved by what I discovered. Originally written under the pseudonym Laurence Hope, the writer was Adela Florence Nicholson. A soldier’s wife during the days of the Raj, in 1904, after her husband’s death, she died by her own hand. In 1901 she had published The Garden of Kama with great success, although some mystery is attached. Nicholson believed there would be no interest in such poems from a woman, hence the alias.

Amy Woodforde-Finden, who also lived in India for  a time, set some of Nicholson’s poems to music under the title Four Indian Love Lyrics. The  most famous of these became known as The Kashmiri Song. This setting contained the quotation I’d been looking for, both musically and literally.

Youtube came up trumps and I discovered Deanna Durbin singing the song to an exquisite Hollywood orchestration in the movie Hers to Hold from 1943 (see below.)

Bear in mind, these were sentimental times. Think of these three creative women, Nicholson, Woodforde-Finden and Durbin, who did not know one another, each a contributor to this enchanting 20th century classic. The song was extremely popular in the first half of the last century but became lost to us as popular music became less sentimental and frankly, more clichéd.

I love Durbin’s extraordinary voice, as rich as claret, even and smooth across the tessitura, with its amazing capacity to sustain long and beautiful lines and her subtle, almost instrumental use of portamento (i.e., sliding between notes.) Consider also how she sings the very last note, on the word  ‘now’. Technically, she needs to breathe but Durbin inflects the word with an extremely simple poignancy, as if to end the dream and invoke the present. The note is not entirely pure, but even the small blemish contributes to the emotion of the moment.

One further thing – Durbin was born in Winnipeg, Manitoba. Having spent a decade in the Canadian city, where honesty and straightforwardness are highly regarded, it’s no surprise she hated Hollywood.